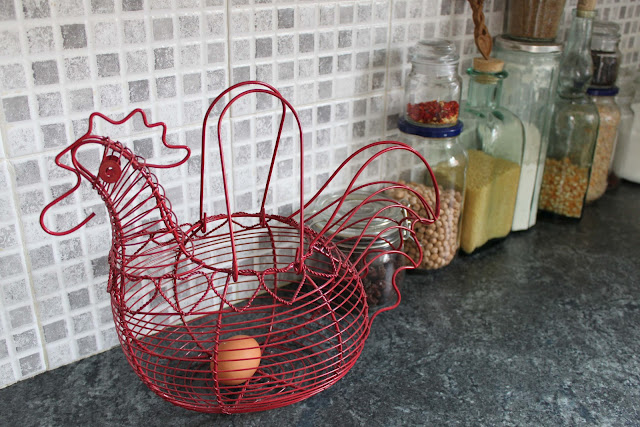 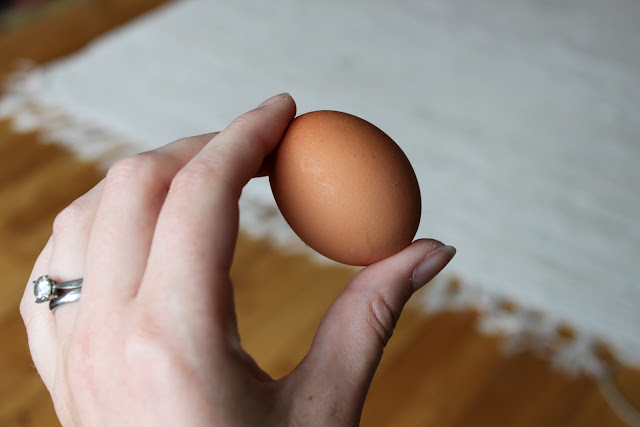 Hi everyone, we got back from Scotland yesterday and it's good to be home, I missed my wee house, our little baby (Cara our kitten) and our new hens, although none of them even noticed we were gone! Typical LOL

We had a perfect holiday, so relaxing, social with good food and light exploring :) We got soaked - right to the skin on our first day on the way to the museum, once inside though it was amazing, really interactive and free! We ate tapas for my birthday evening, swapped cute anniversary gifts and then the sun came out for our last few days and we explored Edinburgh's Castle (from the outside, we didn't fancy £32 to go in!). The gorgeous parks have to be my favourite thing about that city.

I'll get some pictures sorted in the next few days but for now I think this picture sums up our trip pretty well haha!

It's my birthday on Saturday, I'm going to be 25. Then its our wedding anniversary on Sunday, exciting stuff :)  We leave for our trip Edinburgh right after work today (this post is scheduled), I can't wait!

Birthdays in this house are so sneaky, we love to plan little surprises and tease each other about the building suspense. I've had to put up with Al's secretive behavior for nearly a month now, things like waking up in the morning and he's already up, on the laptop and won't tell me what he's doing, I'm even banned from certain areas in my own house!

Who am I kidding? I love it and it makes me feel like such a special lady :) Just seeing how much time, effort and how excited he is about the gifts he's chosen for me shows me how much he cares about making my birthday amazing. I love him!

Yesterday I got my second early present - A beautiful little apple tree, with 5 tiny apples on it - I nearly cried! I just love it so much, it's the perfect gift for me, it really symbolizes our journey and how we are living our dream right now just on a small scale. 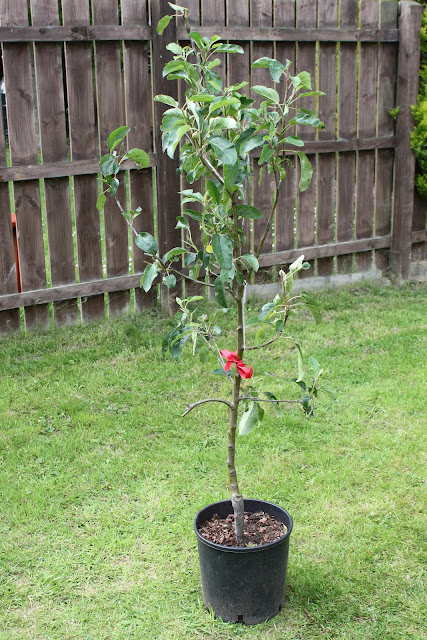 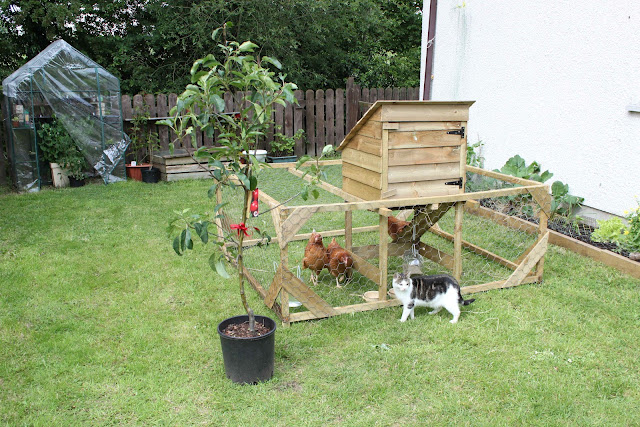 Email ThisBlogThis!Share to TwitterShare to FacebookShare to Pinterest
Labels: gardening

They have names! Reggae, Calypso and Soca! Prominent music from the caribbean, where I spent a few years of my childhood, when I listen to that music it always makes me feel happy deep inside and life seems simple.

"singin' don't worry, about a thing. Coz every little thing, gonna be alright"

It's similar to how we felt when we first saw the hens in our garden - it just felt right. Things like this are what's important - creating our dream piece by piece, with simple things that make us happy. We love the names, quirky, meaningful and fun, what do you think?

The design of the run seems to be working really well, we move it everyday (which takes 2 seconds and is no hassle at all) and it doesn't damage the grass, the ladies get up and down fine on the ladder too. The only thing I can see thats not perfect is that their tail feathers rub on the door when their roosting at night so I'm gona shift the perch over a bit today.

In other gardening news the spuds (potatoes) that we planted in the tyres seem to be doing well, if you missed those posts heres them being planted and a little update picture. Last week I added on another tyre on each and filled the earth up again to near the top, I hope that means even more spuds... We'll just have to wait and see! I also planted another tyre, this time with 4 spuds instead of 1 - too ambitious? maybe but worth a try and they were going off anyway (we just use supermarket ones). So they seem to be doing really really well, they look so healthy, I have a few theories as to why this might be; 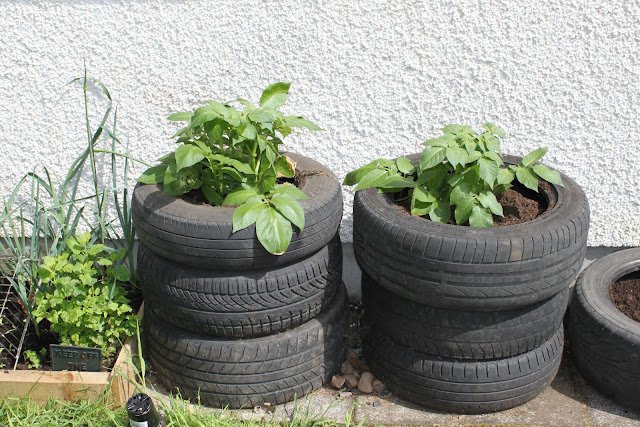 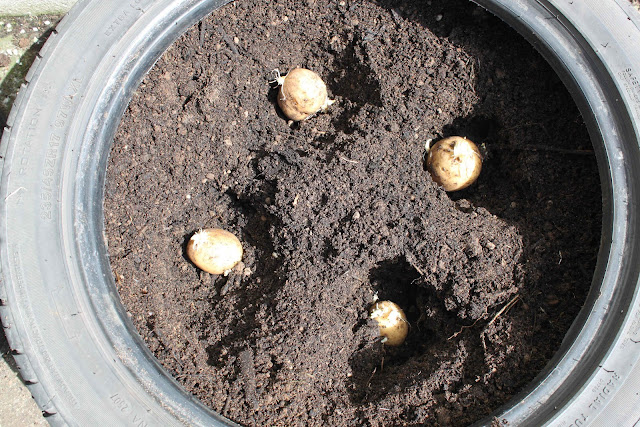 Email ThisBlogThis!Share to TwitterShare to FacebookShare to Pinterest
Labels: gardening 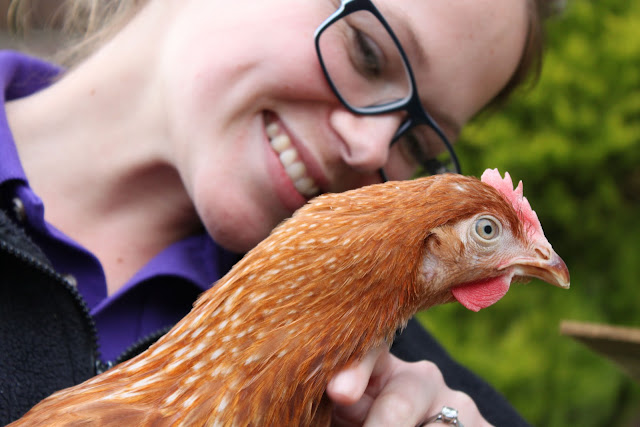 So after a few delays we finally have our 3 gorgeous hens :) My face hurts from smiling so much - no kidding! We just picked them up tonight and they are all snuggled up in their wee house. No names yet, we want to see their personalities a bit more first :) Happy Astra & Al! 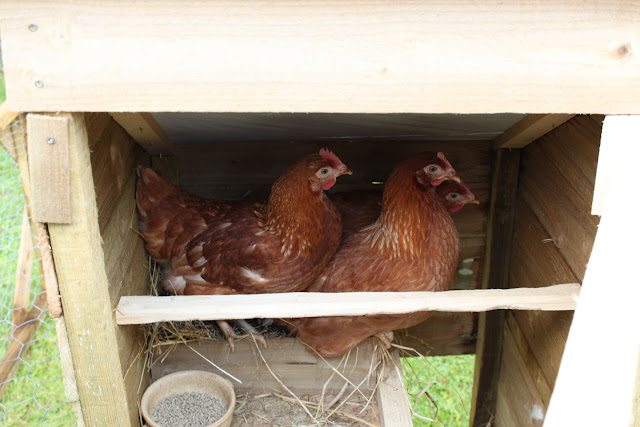 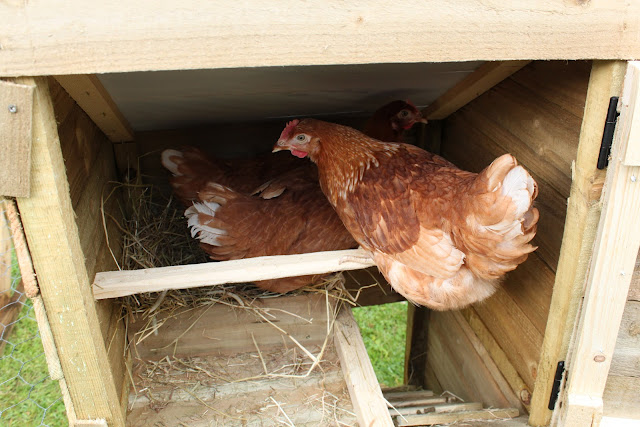 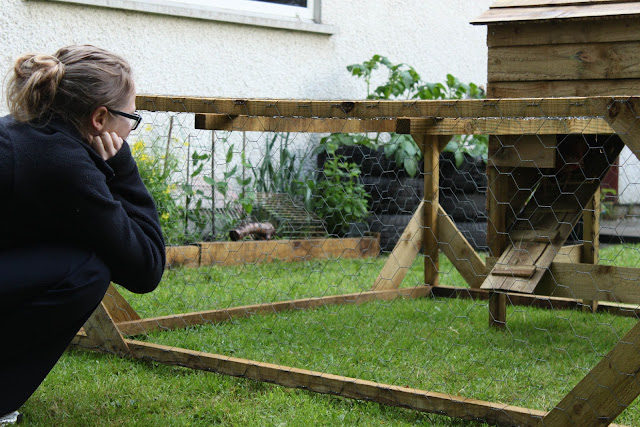 I really wanted to see them out in the run but it was after 8pm so they weren't as keen as me, one did poke a head out though! 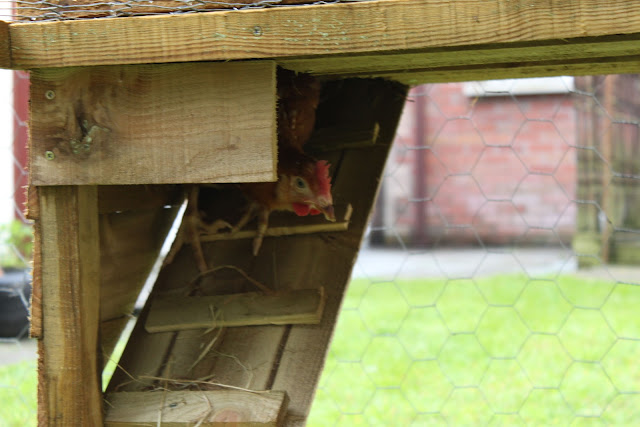 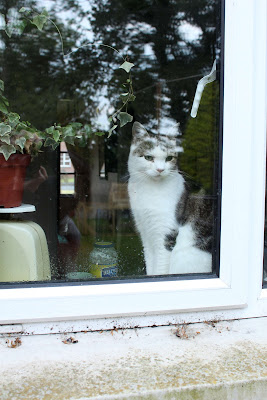 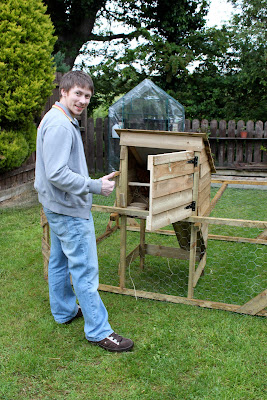 Al's so happy, and not bothered at all that he's now out numbered by us ladies 5:1 lol Cara was watching all this fuss from the kitchen window, looking distinctly unimpressed!

I took these pictures yesterday but never got around to posting them, I just really wanted to post with real hens I guess! Anyway heres the whole run, and Cara making herself at home! 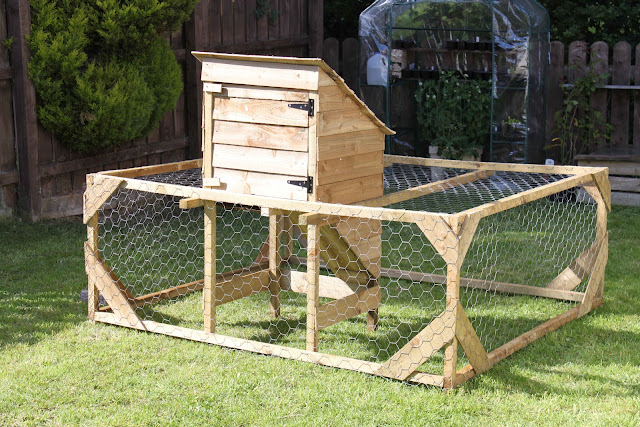 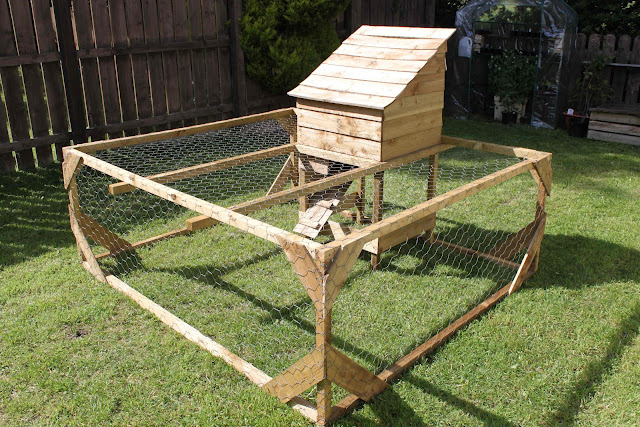 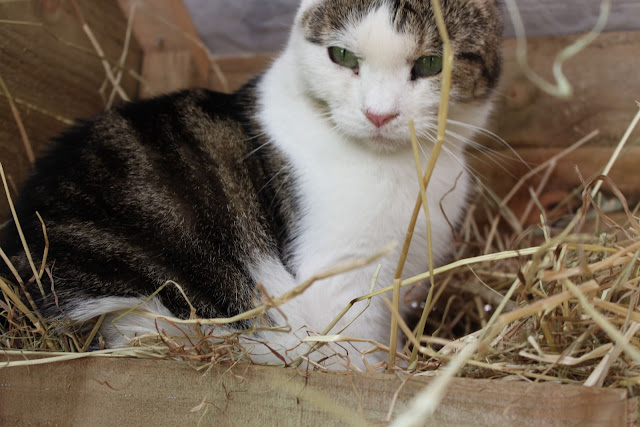 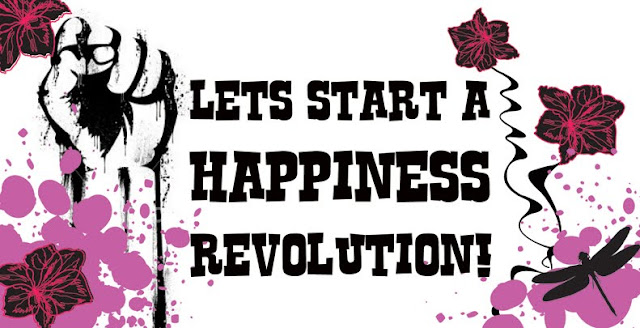 I hope lots of you'll join in this month, sometimes its hard to get started, especially if you've done one already but the great thing about these lists is once you get going all the little things that are making you smile come rushing to you and you feel great!

So just think of 10 things that are making you happy this month, write them down and grab the banner above for your post! Lets forget about the negatives for a minute, turn off the news and give some attention to all the good things in our lives!
Don't forget to leave a comment so I can add you're link to the revolutionaries and people looking for a positivity kick can come find you!

Sorry I couldn't resist the pun! Today the rain halted work and I was stuck inside, it turned out quite nice though. I did some crafting and organising - always satisfying :) Anyway we did some more work on it yesterday and the roof is on the house now and all waterproofed but I didn't want to give too much away before the hens are in but here's a sneak peek... 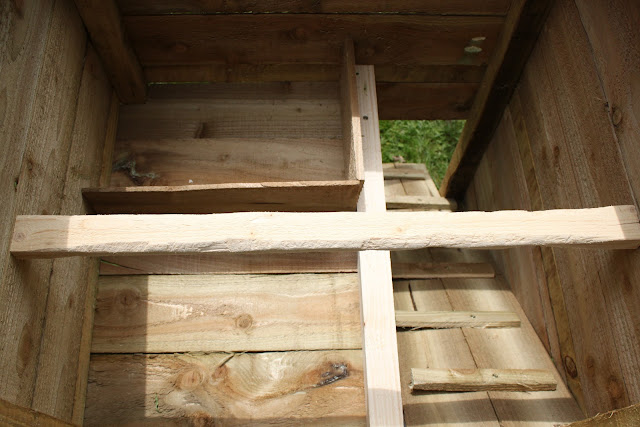 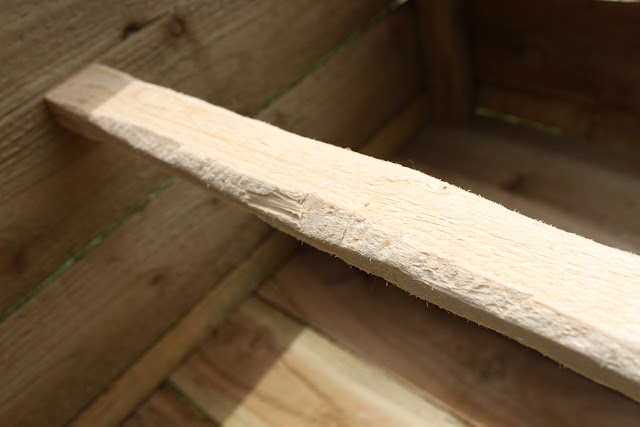 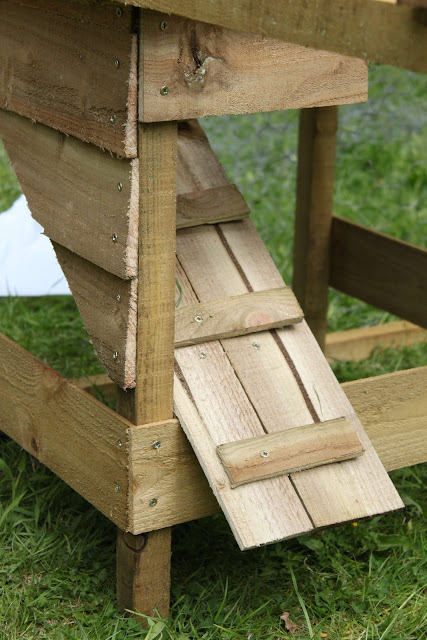 The next pictures will be of our new ladies! I am really happy with how the house has turned out, especially since I did it all myself! Al has been doing the wire. It's taken a lot longer than I first thought but I'm glad I didn't rush it because it looks just like I'd hoped - so happy :) I might post pictures of our 1st house and 2nd house we built so you can see the progression of my carpentry skills LOL

I've a slight confession to make...

Our evenings this week have not been as productive as we intended... We intended to get the hen run/house finished and a bunch of other stuff. Instead we did this...

And you know what? I'm not sorry at all LOL New plan is to have it finished by the end of this weekend. Sometimes you just have to do what you feel like, it's good for the soul I think :)